Recently I Dug out an old headset that I had leftover from my Pro-audio days. It’s A Beyerdynamic DT-109 which is a very nice set of Headphones with a good quality Hyper-cardoid microphone capsule. Ideal for rejecting shack noise and with a response curve well suited for Good Quality communications audio. Data sheet as a PDF here 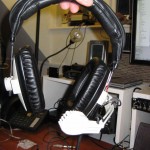 The first issue I had was that the audio level out of the DT-109’s microphone is rather low so I constructed a premap based on this Design. This is powered by the 5V bias that is available from the K3 for driving Electoret condenser microphones. I constructed this preamp on a bit of Stripboard and mounted in a small herb tin I stole from the kitchen.

This worked very well, at least until I turned my amp on.  With my Acom1000 on, even in standby I was hearing a lot of Hum. At first I though it might be down to a ground loop problem, I had taken care to ensure that the ground on the radio side of the preamp was connected at the point where the wire enters the tin but the Microphone side floats above ground and is decoupled by a Capacitor (C1) first I tried a larger value to no avail, Then I tried adding a 1:1 audio transformer and grounding the headphone side. This made matters much Worse.

I hooked up an old solenoid coil to my portable scope and did some sniffing around to get an idea of the magnitude of the field. I discovered that the field was pretty intense in the vicinity of My K3s and their transformer coupled Audio lines so it seemed prudent to relocate the amplifier. Interestingly the Magnetic Field contained a lot of harmonic energy, Due I suspect to the rectifiers in the Power supply. The power supply is contained in the right-hand side of the Acom1000 so the answer was to move the amplifier from the left  of the operating position to the Right. Not an ideal location for ventilation in my shack but  I had some aluminium Ducting that I was able to use to improve the exhaust airflow 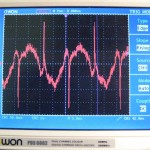 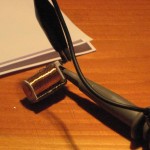 With the amplifier on the right the power supply is a little further away from the microphone element but this position also means that the  side of the microphone capsule is pointing towards the Amplifier and in this position the element is less susceptible to picking up the Magnetic field. This position also places the  k3’s Line in / out transformers a lot further away from the field which should  prevent issues with Digital modes.

The DT-109 now works wonderfully with the K3, I use the following EQ settings

This entry was posted in Audio, k3, shack. Bookmark the permalink.